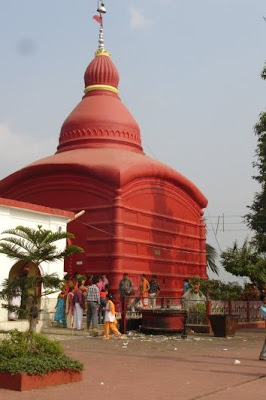 Tripura Sundari temple is one among the 52 Shakti peethas in India. It is situated in ancient Udaipur, about 55 kms from Agartala. The temple was constructed in 1501 A.D. by Maharaja Dhanya Manikya. Temple consist a square type sanctum with a conical dome. This temple is one among the Sati Shakti Peeths. Sati’s right foot have fallen here. This temple houses two identical images of thedeity. The temple premise resembles a tortoise, so this temple is also called as Kurma Pitha. The idol of Maa Kali is worshipped in this temple.

This temple is also known as Kurma Pitha because it the temple premises resembles kurma i.e. tortoise. In the eastern side of the temple there is a famous Kalyan Sagar, where people feed fishes and tortoise.

The legend behind the construction of this mandir is that the king Dhanyamanikya got this message to install the goddess Tripura Sundari. Intially, the king was hesitant but this dream repeated to him again and he decided to install the goddess here. In the eastern side, there is the famous ‘Kalyan Sagar’ lake where fishes and tortoises of huge size are found and devotees feed them with “Muri” (puffed rice) and biscuits. No fishing is permitted in the Kalyan Sagar.

A famous mela or fest is organized here during Diwali.