One of the important herbs from ancient times – Great Burdock

The herb Burdock’s root is a taproot of greater burdock plant, used as a vegetable and medicinal herb. The plant is a short biennial, which believed to be native to Northern Europe and Siberia. In Japan, popular as gobo, it is cultivated as a major root herb since ancient times. However, burdock grows as a wild, easy growing hardy plant almost in any parts of the planet.
This common weed was prized by the Celts, who cooked its roots for medicinal use. They considered burdock a detoxifying herb and consumed it freely to cleanse the internal system. They gave it to the elderly to treat ailments like arthritis and to teens to heal acne. 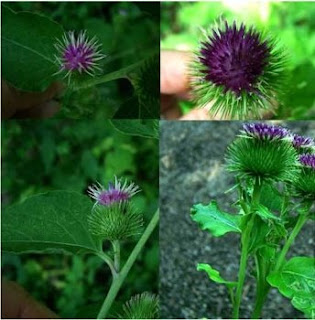 Folk herbalists consider dried burdock to be a diuretic, diaphoretic, and a blood purifying agent. Various parts are used to prevent baldness and to treat rheumatoid arthritis, skin infections, acne, boils, bites, eczema, herpes, impetigo, rashes, ringworm, sore throat, sciatica, poison ivy and poison oak, as a tonic, diuretic and mild laxative, to stimulate bile production and to induce sweating.
Once widely used in cleansing remedies, burdock is familiar for its hooked burrs, which readily attach themselves to clothing. This property is reflected in the herb’s botanical name, from the Greek arktos, or bear, suggesting rough-coated fruits, and lappa, to seize. Burdock was a traditional blood purifier, often combined in fold brews such as dandelion and burdock wine, and it was once popular for indigestion. In China, the seeds, niu bang zi, are used to dispel “wind and heat evils”; they also lower blood sugar levels.
Sometimes planted in Japan, where it has been improved by cultivation for its enlarged parsnip-like roots, which are eaten as a boiled vegetable. Burdock is a common European weed; was brought to America as a medicinal plant. It soon became widely scattered, because the burdock seeds attached themselves to colonists’ breeches, clothes and the fur of animals. Millspaugh wrote, “the herb is so rank that man, the jackass, and the caterpillar are the only animals that will eat it.”
-It grows well in fresh, worked soil rich in humus, and should be positioned in direct sunlight.
– Roots are used to treat throat infection.
– It is also used to treat skin infections like
-rashes
– boils
– bruises.
– burns.
– herpes.
– eczema
– acme
– ring worm
– insect bites
It’s leaves and seeds are crushed and used on
– bruises
– burns
– ulcer
– sores