Tarapeeth or Tarapith, is one of the Shakti Peeths in India. There are a number of Shakti peeths in india, which is based on the famous incident of Devi Sati giving up her life after her husband was insulted by her father, Daksha Prajapati.
TaraMaa ofTarapith is another form of Kali. She has two hands, is garlanded with snakes, is adorned in sacred threads, and has Shiva lying in her left lap sucking her breast.  This temple is dedicated to the destructive aspect of Shiva, who takes the form of Kali. She requires sacrifice daily to satisfy her blood lust so every morning goats are sacrifices on the altar of the temple.The temple is busy throughout the year and is surrounded by poor who come to have free meal. This is one of the most sacred places where every year several millions of devotees come to offer worship. Tarapith is regarded as Mahapeeth and extremely holy place for all Hindus.
It is said that wherever you are in this beautiful world, whatever be you and your religion, the kindness and blessings of Maa Tara will reach you to fulfill your desires, if you are an honest and upright person. She will provide you relief from pain if any your heart and mind. This is the reason for which every year millions of devotees gathers at this place to offer Puja and prayer. 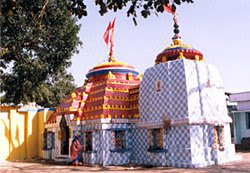 Tarapeeth is among 52 Shakti Peeth is situated on a hill top at a distance of 30 Kms towards north of Brahmapur on the south bank of river Rushikulya. This temple is 264 km from Kolkata, Tarapith is situated on the banks of the north flowing Dwarka River, in Birbhum, in West Bengal.

There are 999 steps on the front side of the hill leading to the temple and also a pucca road for vehicle on the backside of the hill facilitating devotees to reach at the Pitha. This is one among the ancient shakti peeth and is also called mahapeeth. 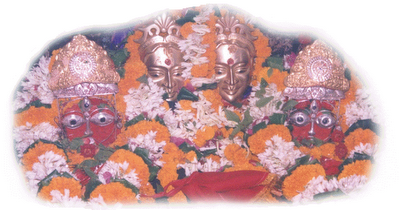 The Twin Goddesses Tara and Tarini are worshiped as manifestations of Adi Shakti. Two stones anthropomorphized by the addition of gold and silver ornaments and shaped as human faces represent the Goddesses Tara and Tarini as the deities of this temple. Between them are placed two beautiful brass heads known as their Chalanti Pratima or their living image.
Festivals that are celebrated here are:
1. Sankranti Mela : This festival is observed on each Sankranti day of the Hindu month.
2. Dola Purnima (Phalguna purnima) during February / March.
3. Chaitra Parba This festival is the most important of the festivals, celebrated at theTara Tarini Pitha. It is observed during each Tuesday of the month of Chaitra.
4. Basantika parba During the month chaitra i.e. March / April.
5. Chitalagi Amabasya (Srabana Amabasya) during July / August.
6. Gamha Purnima ( hrabana Purnima ) during July /August.
7. Saptapuri Amabasya during the month of Bhadraba during August.
8. Sasadiya parba on the month of Ashwina Mulastami to Dushara during September / October
9. Shyamalika puja: on Kartika Amabasya during Oct /Nov.

Another oral legend about the temple states that sage Vasistha practised austerities to Tara, but was unsuccessful, so on the advice of a divine voice, he went to meet the Buddha – an Avatar of god Vishnu – in Tibet. Buddha instructed Vasishtha to worship Tara by the left-handed Tantric worship using five forbidden things like wine and meat. During this time, Buddha had a vision of Tarapith as an ideal location for enshrining the image of Tara in a temple there. Buddha advised Vasishtha to go to Tarapith, the abode of Tara. At Tarapith, Vasishtha did penance by reciting Tara mantra (hymn) 300,000 times. Tara was pleased with Vasishtha’s penance and appeared before him. Vasishtha appealed to Tara to appear before him in the form of a mother suckling Shiva on her breast, the form that Buddha had seen in his divine vision. Tara then incarnated herself in that form before Vasishtha and turned into a stone image. Since then Tara is worshipped in the Tarapith temple in the form of a mother suckling Shiva on her breast