The festival of Saraswati Puja

Saraswati Puja or Vasant Panchami is the festival of scholars. On this day, goddess Saraswati is worshipped. She is considered to be the goddess of knowledge, art and music. She holds the veena ( a musical instrument) and also referred as Veena Vadini. This festival in india follows the another important festival – Makar Sankranti. Vasant Panchami marks the onset of spring season. It is celebrated every year on the fifth day of the Indian month of Magh. In southern part of India, this festival falls on navaratri. This festival is followed by another major festival – Holi.

It is believed that on this day goddess Saraswati was born on this day. Saraswati is the hindu goddess of knowledge, music, arts and science. She is the companion of Brahma, also revered as his Shakti (power). It was with her knowledge, that Brahma created the universe.This festival is celebrated in temples, homes schools, colleges and educational institutions. Goddess Sarawati’s favourite colour is white. She is seen as the serene Goddess wearing a crescent moon on her brow riding a swan or seated on a lotus flower.

There is also a custom of ancestor worship, known as ‘Pitri-Tarpan’ in many parts of India during Vasant Panchami.

In the eastern part of India—Tripura, Orissa, West Bengal, Bihār and Assam,—Saraswati Puja is celebrated in the Magha month (January–February). It coincides with Vasant Panchami or Shree Panchami, i.e., the fifth day of the bright fortnight of the lunar month of Magha. People place books near the goddess’ statue or picture and worship the goddess. Book reading is not allowed on this day.

In the southern states of India, Saraswati Puja is conducted during the Navaratri. Navaratri literally means “nine nights”, but the actual celebrations continue during the 10th day, which is considered as Vijaya Dashami or the Victorious Tenth Day. Navaratri starts with the new-moon day of the bright fortnight of the Sharad Ritu (Sharad Season of the six seasons of India) during September–October. The festival celebrates the power of the feminine aspect of divinity or shakti. The last two or three days are dedicated to Goddess Saraswati in South India.

Unknown fact about Draupadi – Why she had five husbands

When incarnation of Lord Vishnu could not defeat his bhakta

Narada muni is the person who is almost available everywhere in mythological texts. Who is he exactly and what is his role? He is the son of Lord Brahma and great devotee of Lord Vishnu. Sage Narada had blessings that he could show up anywhere, anytime and anyplace. He used these blessings and appeared in all yugas (satya, treta and dwapara) from time to time to spread the good word and help the needy. He traversed distant worlds (or planets) but never went anywhere without a purpose. He used to make his purposeful entry by chanting the name of the lord Vishnu (Narayana) and playing a veena (a musical instrument).

It is said that he could not keep any secrets and thus fuelled a lot of controversies as he would reveal secrets a bad time or spreading gossip. Therefore he was often mistaken as a quarrel-monger and a talebearer. His deeds often brought a trouble and friction among gods, demons and men.

Narada had knowledge of all vedas and puranas and he strived for welfare of human being.

Narada was behind the writing of the Ramayana by sage Valmiki. Apparently he told Valmiki about Lord Rama. Valmiki was looking for a person who was perfect. After Narada told him about Rama, Valmiki saw a hunter killing krounch birds. He wanted to curse the hunter, but a shloka came out of his mouth which became the first lines of the Ramayana.

Prahlada was taught by Narada when he was in his mother, Kudayu’s womb. Thus, he was a devotee of Lord Vishnu even before he was born. Later, Lord Vishnu took Narsingh avatar to kill prahalada’s father, Hiranyakashyap.

Once, Narada became proud and started boasting that he had conquered Kama. Lord Vishnu taught him a lesson. The whole story is available here. Narada boasted that he was the most dedicated follower of lord. Vishnu asked him to carry a pot on his head and ensure that not a single drop is wasted. He obediently carried out the task. After this, Lord Vishnu asked what he was thinking when carrying the pot? He replied – of course, I was thinking that pot should be carried carefully. Lord Vishnu smiled and said, then how can you claim that you are the best devotee when you were not thinking about me? Narada learnt his lesson. 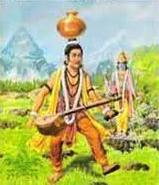 Dhruva, son of king Uttanpada, was determined to carve out his own place after he was scolded by his stepmother, Suruchi. His mother, Sunita consoled him and asked him not to get distraught, but Dhruva was determined. Sage Narada was pleased with Dhruva and he given him a mantra “Om Namoh Bhagwate Vasudevay” to chant. Lord Vishnu, happy with Dhruva, awarded him a special place. 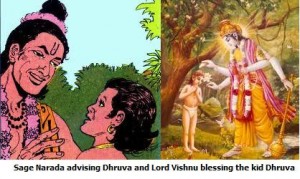 Tripurasura – The three sons of Tarakasura

Tripurasura were three sons of  Tarakasura. There names were Vidyunmali, Tarakaksha and Viryavana. Tarakasura was killed by Devtas and he instructed his family to ensure that his death was avenged.

The boon of Lord Brahma

With the advise of Shuracharya, the three sons started doing severe penance. Eventually, Lord Brahma got pleased of there penance and asked for a boon. Expectantly, they asked for immortality. Lord Brahma replied that this is against the rules of the nature. So ask me something else. They said – “Grant us the following: Let three forts be made. The first will be of gold, the second of silver and the third of iron. We will live in these forts for a thousand years. These forts built in different worlds shall align once in every 1000 years. This combined fort will be called Tripura. And if anyone can then destroy Tripura with only a single arrow that shall be the death destined for us”. Brahma granted this boon to them. There was a demon named Maya who was very entrusted to build the three forts. The golden fort was built in heaven, the silver one in the sky and the iron one on earth. Tarakaksha got the golden fort, Viryavana the silver and Vidyunmali the iron fort. All forts were as large as a city and had many palaces and vimanas (space vehicles) inside. The demons started living in the three forts and began to flourish.  They were following the things written in scriptures. As usual, Devas did not like this. They went to Lord Shiva for help but returned empty handed as demons were doing nothing wrong. God then reached out to Lord Vishnu.

Lord Vishnu knew that the Tripurasuras could not be killed till they remain Virtuous and religious.  He then created an entity from his body who had no hairs on his head. He had worn dirty clothes and a bag was hanging down his shoulder. He also had a broom in his head. The entity asked lord Vishnu about the purpose of his existence and his name. Lord Vishnu told him that his name was Arihan. He also instructed him to create a scripture which stresses upon the importance of action (Karmavad) and which is different from the rituals explained in the Vedas. Lord Vishnu specifically instructed him to keep the language of that scripture as simple and degenerated as possible. Lord Vishnu then preached Arihan on the science of illusion which stressed that the heaven or the hell does not exist anywhere else, but on this earth itself.

Lord Vishnu instructed Arihan to get Tripurasuras initiated into with this philosophy so that the demon-brothers become irreligious. Vishnu ordered Arihan to make his residence in a desert with his disciples. The being did as he had been asked to. He and four of his disciples went to a forest that was near Tripura and began to preach. They were trained by Vishnu himself.  Therefore, their teachings were convincing and they had many converts. Even the sage Narada got confused and was converted. In fact, it was Narada who carried news of this wonderful new religion to king Vidyunmati. King, he said, there is a wonderful new teacher with a wonderful new religion. I have never heard before. I have got converted. Since the great sage Narada had been converted. Vidyunmati also accepted the new religiqon, and in due course, so did Tarakaksha and Viryavana. The demons gave up revering the Vedas, they stopped worshipping Shiva’s linga.

Lord Shiva and killing of Tripurasura

Now the time was ripe of killing of Tripurasura, since they have now deviated from the good path. Once again, devas requested Mahadev to kill these demons. Lord Shiva acceded to this request. Lord Shiva called Vishvakarma and asked him to make a suitable chariot, bow and arrow. The chariot was made entirely out of gold. Brahma himself became the charioteer and the chariot was speedly driven towards Tripura. The gods accompanied Shiva with diverse weapons. By then a thousand years had passed so that the three forts had become a single Tripura. Shiva installed a divine weapon known as pashupatastra (the arrow of pashupati- another name given to Lord Shiva ) into his arrow and shot it at Tripura. The arrow burnt up Tripura into ashes in a split second. So, all gods of the trinity were involved with Tripurasura. Lord Brahma gave a boon, Lord Vishnu thought of a way to neutralize them and finally, Lord Shiva destroyed them.

Duly Kaam reached there alongwith Rati and Spring and tried to break his penance. They were unsuccessful because of the fact that Lord Shiva once burned Kaam’s body and that place was had no effect of Kaam deva and his antics.

When Indra came to know that Kaam has failed, he was impressed and personally met Sage Narada and congratulated him. Narada became very happy and he started boasting that he had conquered Kaam.

He told this to Lord Shiva and Lord Brahma and advised by both gods to keep this to himself. But Narada was not satisfied. He wanted to give the news of his achievement to Lord Vishnu. So, he went to Lord Vishnu’s abode and boasted about his feat of defeating Kaam deva.

Lord Vishnu decided to teach him a lesson.

While returning from Lord Vishnu’s abode, he saw that a beautiful princess was looking for a groom and swayamvar was being organized. As advised by gods, Kaam deva entered Narada’s heart and he was completely in Kaam Deva’s control. Narada was fascinated by the beauty of the princess and he requested Lord Vishnu to make him beautiful like the lord himself.

Lord Vishnu made Narada’s whole body very beautiful except his face, which he made like a monkey. This caused amusement amongst the courtiers and the girl herself. When Sage Narada saw his reflection in the water, he realized what happened.

Out of rage, he cursed Lord Vishnu that he would suffer from separation of his wife and he will need help of monkeys. Lord Vishnu accepted this without hesitation. This curse became true in Vishnu’s incarnation as Lord Rama.

Meanwhile the illusionary powers were removed after which the sage realized his mistake and learn his lesson.