The story of Ganga coming to earth is long but interesting, I will try to keep this as short as possible without losing the plot.

In World mythology, there are many stories related to rivers, but the story around Ganga or The Ganges is very fascinating. 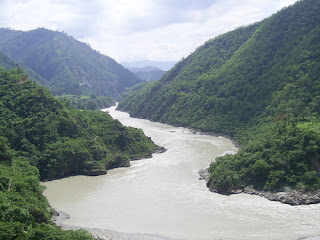 As per the Indian mythology, the person who is accredited for taking Ganga to earth from heaven is Bhagirath and Ganga is also known as Bhagirathi. Bhagirath wanted Ganga to come to earth to liberate his ancestors and he appeased Lord Brahma through severe penance. He was warned that Ganga flows with tremendous force and power and he will have to think of a way to avoid the impact on earth when she comes down to earth.
Bhagirath then began another severe penance, this time directed towards Lord Shiva, who appeared soon before him and agreed to soften Ganga’s fall in his matted hair locks. Having tied up all loose ends, and acquiring the grace of both Brahma and Shiva, Bhagiratha now felt secure about accomplishing his objective. But there were still hiccups on his path, before all issues could be successfully resolved.
Ganga is visualized in Indian thought as a virtuous, but mischievous and restless maiden, just as many young lasses are. She followed Brahma’s diktat to descend to earth, but couldn’t playfully resist the unwarranted and undeserved feeling that she could sweep away even the mighty Shiva in her forceful current. Shiva, gauging her thoughts, decided to teach her a lesson. Spreading open his serpentine coils of hair, he covered the entire sky, and collected all the waves of Ganga in his outspread locks.
Then with a mighty swoop, he collected his hair, tied into a neat and tight bun, and captured Ganga in the infinite swirls and whirls of his hair. Ganga still flowed with tremendous force, but could not escape, and remained imprisoned and confined inside Shiva’s hair.
Bhagirath, perplexed at the happenings, appealed to Shiva to release Ganga, so that she could wash away the sins of his ancestors, symbolized in their mortal remains. Shiva relented, and in any case Ganga had learnt her lesson. Thus Ganga again followed Bhagirath, who showed her the way. But there were still more adventures to come.
Just near their ultimate destination lay the hermitage of another accomplished sage, known as Jahnu. Ganga, ever the playful maiden, hurried over to what she perceived was a new and curious place. And lo, barely had she entered upon the precincts of the ashram (hermitage), that it became flooded, and all sacrificial fires were extinguished. The ritual utensils and tools were washed away, and the inhabitants of the sanctuary became frightened and anxious. The leader of the ashram, sage Jahnu, became livid at Ganga’s intrusion. He then chanted a mantra, and took a sip of the water flowing all around his hermitage. With the power of his mantra, he swallowed away Ganga with all her waters. All traces of Ganga were gone. Bhagiratha was in a fix. No sooner had he overcome one hurdle, than another was created, mostly due to the impulsiveness and restlessness of Ganga. He hurried over to Jahnu, and explained to him the magnitude and significance of the task he was out to accomplish. Jahnu gave him a sympathetic hearing and appreciated his hard work in bringing Ganga to the earthly realm. Consoling Bhagiratha, he said: ” For you, I will release Ganga immediately,” and saying this, he made a cut in his left thigh, and the waters of Ganga flew out like a fountain. Hence did Ganga came to be known as Jahnvi, the daughter of sage Jahnu.