Nature is full of wonders but these architects of natural world are amazing. These creatures have not taken any training and still are masters. In true sense, their creations are the seven wonders of architecture of natural world.

1. SOCIABLE WEAVER BIRD
The sociable weaver build their nests on trees, which are largest in the world, A huge apartment is build when many pairs of birds work together. The dimension of largest sociable weaver nests is over 20 feet to over 10 feet with more than 100 individual nesting chambers. Some weigh several thousand kilograms and can get so heavy they knock down the supporting tree. 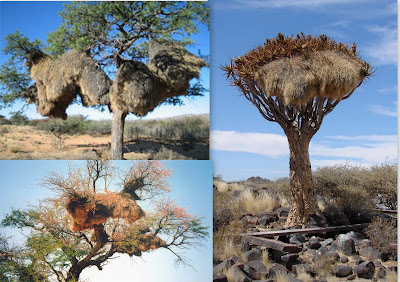 For building the nest, sociable weavers use different materials for different purposes. Large twigs form the roof of the nest, dry grasses create the separate chambers, and sharp straws protect the entry of tunnels from their enemies. Inner chambers are lined from top to bottom with soft fur, cotton, plant material and fluff.
2. TERMITES
Termites are amazing creatures, these .4 inch blind creatures can construct huge towers of several feet and weighing several tons. Termites uses soil, mud, chewed wood/cellulose, saliva, and feces to build homes for their colonies, and this can be of 6 meters. 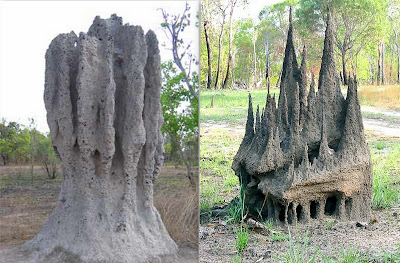 3. SPIDER
Spider produces silken threads using their spinneret glands located at the tip of their abdomen. Each gland produces threads for special purpose like, a trailed safety line, sticky silk for catching prey and soft silk for packing it. Sometimes a group of spiders may build web together in the same area. It is common for a web to be 20 times the size of the spider building it. But world’s largest web was found in 2007, in park Lake Tawakoni in Texas, a huge web was found covering 180 meters of trees and bushes. Initially the web was white, but turned dark due to mosquitoes caught in it. 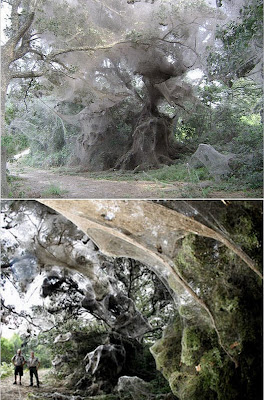 4. BEAVER
Beavers are nocturnal, semi aquatic rodents. Beavers are known for building dams, canals and lodges. They use their strong front teeth to cut trees and plants. In absence of a pond beaver construct a dam before building a lodge. First they place vertical poles and then fill between the vertical poles with a crisscross of horizontally placed branches. They fill in the gaps between the branches with a combination of weeds and mud until the dam holds back sufficient water to surround the lodge. In Canada the longest recorded beaver dam in the world spans 2800 feet, and has existed for over a decade. 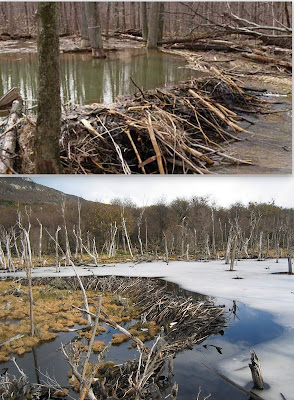 5. ANTS
Ants are incredible builders that can carry many times their own weight. A species of Argentine ant introduced into Europe about 80 years ago has developed the largest super colony ever recorded. It stretches 6,000 kilometres – from northern Italy, through the south of France to the Atlantic coast of Spain – with billions of related ants occupying millions of nests. While ants from rival nests normally fight each other to the death, ants from the super colony have the ability to recognise each other and co-operate – even if they come from nests at opposite ends of the colony’s range. The Argentine species (Linepithema humile) probably came into Europe on imported plants. Another is in the US, known as the “Californian large”, extends over 900km (560 miles) along the coast of California and third, huge colony exists on the west coast of Japan. 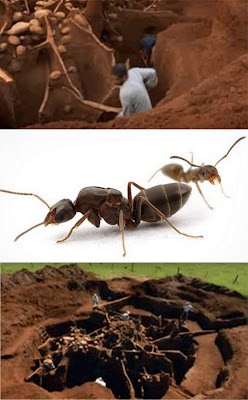 6. CLADDISFLY
Claddisfly is a under water architect. It doesn’t construct something huge but, something very unique. The larval form of this fly construct a portable case or sac with silk threads and any other material available like sand, twigs, stones, shells to protect them and to provide natural camouflage. After the pupal stage they cut the sac with their mandibles and fly. 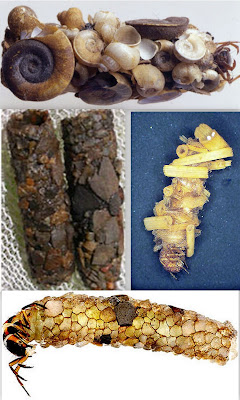 7. NAKED MOLE RAT
Naked mole rat are pinkish-gray, wrinkly skin, scant hair, and long buck teeth. This is the only known social mammal. Virtually they spend their entire life in the total darkness of underground burrows. They are truly social and live in large colonies, with 80 to 300 individuals. Working as a team they are extremely efficient excavators, a colony of 80 can dig an area of 20 football field in less than three months Their shape incisors are the best digging tools. Their teeth 2 upper one and two lower one are located outside the mouth, so that they don’t swallow unwanted dirt and the hairy lips are behind the teeth. 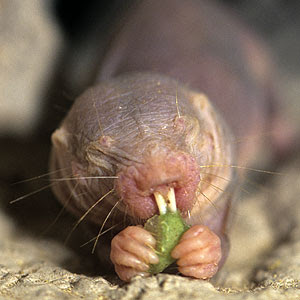