Japanese wedding can be either a traditional or a western one. It can be either arranged or love. But first of all the couple should be legally married by filing for the marriage at local government office. Actually the documents are required for further ceremonies to be held.
In a traditional shinto ceremony an elaborate ceremony is held at shinto shrine. 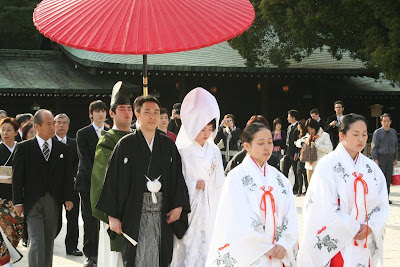 Traditional Sinto Japanese wedding at the shrine, with bride
wearing Japanese wedding Kimono (Uchikake)
Whereas in a western one the ceremonies are held in a chapel, it can either be a simple or an elaborate one. Before the ceremony there is a rehearsal in which bride’s mother lowers her daughter veil, signifying the last act which she can do before giving her. Then bride’s father walks the bride down the aisle to her groom. This is followed by a procession in which the wedding celebrant wear a wedding cross, or a cana which symbolises a couple’s commitment to share life together. They give brief welcome and speech before announcing bride’s entrance. This ends with bowing of groom to bride’s father who does the same in return. Now starts the service, after the reading of Bible there is prayer and short message, explaining the sanctity of wedding vows. Bride and groom share their vows, exchange rings and at last sign register and then are declared a new couple.
Nowadays, both traditional and western style ceremonies are merged and marriage is conducted in a way, which is called contemporary style wedding. In this on the wedding day all the participants get ready in their formal Japanese attire. Bride attire consist of an extravagant kimono, heavy makeup, a wig and head covering. Photographs of bride groom and their relatives are taken which is considered as an essential part of wedding day. After this lengthy photo shoot they go to shinto shrine, where priest conduct ceremonies. Firstly the bride and groom are purified, then they exchange nuptial cups of sake. Due to western influence instead of shinto shrine they may go to a hotel where all activities takes place. The couple often exchange wedding rings and take vows. After all the wedding ceremonies are over there is a reception. This include dramatic entrance by bride and groom, speeches and other performances. Bride has to change her dress for 2-3 times. After speech session, cake is cut and then it’s time to eat and drink. During this both bride and groom again change their outfit and at the end they wear a western style of attire. After the last costume they perform a candle service, in which they light candles on the table where their parents are sitting then all the candles placed on guest tables. Then reception ends with a flower presentation ceremony, where newly wed couple present flower to their parents.
Read about other weddings.
We would love to hear from you. Please provide your valuable comments/feedback either through facebook box or wordpress comment form. Webmaster – ritsin.com.