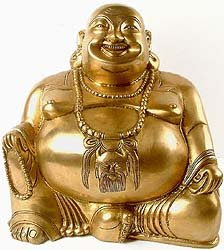 The celestial Buddha named Hotei or Pu-Tai is best known as the jolly Laughing Buddha. In China, he is known as the Loving or Friendly One. He is based on an eccentric Chinese Ch’an (Zen) monk who lived over 1,000 years ago and has become a significant part of Buddhist and Shinto culture. Because of this monk’s benevolent nature, he came to be regarded as an incarnation of the Bodhisattva who will be Maitreya (the Future Buddha). His large protruding stomach and jolly smile have given him the common designation “Laughing Buddha.”
Laughing Buddha has been regarded as an incarnation of Bodhisattva and due to his protruding belly and jolly nature was given the name laughing Buddha. Images of Laughing Buddha can be seen gracing various amulets, temples and restaurants. The benevolent Buddha is also regarded as deity of abundance and contentment.
You can always see him carrying a sac which is always filled with some precious things. He is patron of weak, poor and children’s.
According to legend, if one rubs the Laughing Buddha’s great belly, it brings forth wealth, good luck, and prosperity. Hotei is also referred to as the patron saint of restaurateurs, fortunetellers and bartenders. When one overeats or over drinks, friends jokingly attribute it to the Laughing Buddha’s influence.
If you are an PMP aspirant, you may like to check P M P L O G